I don't know about you, but every now and then, I sign into fury, just too look at it....
it's like....
a place, we used to all go and meet
now it sits empty, severs still operational, channels empty, everything. Just a dead stop.

You know what was nice about the fury community, we are all older generation gamers. You don't find that ANYWHERE is ANY gaming community today. Some would say, the first true gamers ever. The majority of us, in our late 20's early 30's, saw N64 around 13. Day of Defeat has ALWAYS been in our lives. Day of Defeat surpassed multiple league changes, babies, girlfriends, age, even game updates. Day of Defeat 1.3 was always there.

Fury always had at least one fag-nerd online trying to get 12. As much as I and most of you disagree on alot of things, I would say we all miss DoD on Sundays. You know, it was actually a PUB LEADER of all people who once told me "Yea Tony, well when your league is done taking everything super serious, and when everyone stops playing, our pub teams will still be here. There is now, and always will be, a bigger pub community for DoD, simply because.....we dont give a FUCK who the best is......we just like the game........"You have been banned from the server". "

What do we do? is this really over? Forever? Why? Are we really down to just fluxx trolls (who was never even actually good at the game anyways and refused to play without his precious lag script that made him ALMOST on the same level)
And my own personal desperate attempts to get people wanting to play dod again? is it not fun? Do we not love?........why.......

milo?
chris?
tin?
rob van winkle?
pb?
devin?
beas?
seveN?
chimpanzebra? (i will never forgive you for intentionally playing bad in the draft because even though i hate your faggy guts, i still believed you to be the best player at the time you diva)
ian?!?!?!?!?!
cK?
mike??
spider?
shoguN?
Austin?
CHOP CHOP????????
rws? (you fag stop scripting and yes aware of the irony)
ralle?
Koziu?
Beaners in general?

Is that REALLY just it? we are not gonna organize anything anymore and that's just it? You call yourselves legends. Day of Defeat is only as dead as we make it. DoD is not dead. It's right there. On Steam. There is over 500+ people playing the game at any time of any day.......They just don't care who the best is.
Maybe it's time, we all look at each other, and not ask ourselves, "who is better, me or him?" and instead, we tell ourselves, "We are the best".....

I'm officially asking TPG to allow me to attempt to re-run the league, or at least allow me some sort of outlet to somehow get DoD back in our lives on Sundays. I don't care if its 300 teams or 3, Day of Defeat Needs to be in some of our lives on Sundays, and I will be a cold dead man before i pretend like it's okay for DoD to be completely over. If DoD was meant to die, it would have died when source came out. There is a reason there is 50+ american pub clans operating at this moment. They Operate for the love of the game

Superbowl Sunday I will be in fury vent
And also the following sunday because of the Superbowl
9pmEST.....just like old times
Anyone who is interested in helping me perhaps start some sort of a pubclan community comprised of left over league players, or ANY LEAGUE OFFICIALS, WHO WOULD KINDLY TAKE THE COWARDLY HEADS OUT OF THEIR COWARDLY ASSES, AND MAYBE HELP US JUST A LITTLE. THATS GREAT, YOURE TIRED OF RUNNING TPG. WE ARENT TIRED OF PLAYING. GIVE IT TO SOMEONE WHO CARES IF YOU DONT. 2 TEAMS, 10 TEAMS, SOME OF US JUST DONT CARE. WE JUST WANT TO PLAY. i'LL PUT MY ENTIRE LIFE BEHIND IT, JUST GIVE ME, AND THOSE OF US WHO STILL WANT IT, BACK OUR DOD. THIS HAS GONE ON LONG ENOUGH. WE WERE CHILDREN WHEN WE STARTED PLAYING THIS GAME. SOME OF US WERENT EVEN IN HIGHSCHOOL. NOW WE ARE GROWN, JOBS, KIDS OF OUR OWN, JOKING WITH SPIDER, AS HIS TEAM PULLED OFF AN EPIC UPSET, ABOUT HOW IS SON WAS GOING TO LEARN DOD, AND BECOME A SNIPER AND LEARN HOW TO TAKE DOWN GIANTS. GIVE OUR GAME BACK TO US. APPOINT SOMEONE ELSE OF COURAGE IF NOT ME, JUST DO SOMETHING.........IT DOESNT HAVE TO END THIS WAY.


"so much hate for the ones we love
tell me we both matter, dont we?"
Top 1) Petition Valve to make an updated DoD-style game
2) Wait for the 8 years it takes for them to complete it
3) Now new 12 year olds will get interested and build a community for you
4) Play this new game with 12 year olds and have fun
5) Make a league for it. Call it TPG if you'd like. Ban Dustin from it
6) Win TPG
Top

LoL FURY vent was good for 12 mans and hearing every member fury bitch about who was cheating and whose bullshit, possibly the worst group of gamers who hadn't a clue. U attempt to get a season of anything is quite funny ur more hated then me lil nigguh, even u u got a few teams together the end result would be the other teams overriding you and what team ur on to go and hold there own tourney without u
Top

knockout wrote:5) Make a league for it. Call it TPG if you'd like. Ban Dustin from it lol Tony if you're that nostalgic sign up for tpg's fast cup. I plan to pull it regularly if there is enough interest ie 2 or more teams. I jumped on troll wagon to make fun of your drunken posts but in reality you just wanted the game to last. since I came to back to play in 2010 whilst playing cal for less than a season back when dod mattered I understand your feelings. anyway there is life outside dod and nowadays people call it csgo. ktp.

There was no cal in 2010 also u never played anywhere before 2010. Only brazilian that mattered was chevsky
Top

omg i'd be mad now if i weren't enjoying my vacations fishing with my dad. nt tho lil eminem wannabe orphan pzl8
Top

knockout wrote:5) Make a league for it. Call it TPG if you'd like. Ban Dustin from it

I can't even lie, I came home late, high as FUCK on MDMA, and i started listening to some house music, and I started to think I could save dod 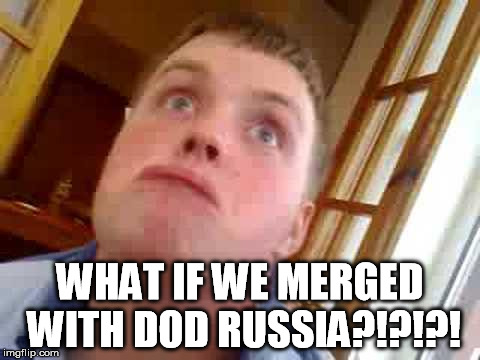 I just signed on to steam for the first time forever

Started and finished a 12man

took me 5min to start locate 12 and a server

what in the literal fuck....

is it actually real?
Top

Is that TWO 12mans in ONE week?

I heard that milo pb tin and other legends got one going the other day!
right on boys

I signed into steam for the first time in 3 months to talk to pb about the mudman (https://www.youtube.com/user/1222gjg)
and jokingly, i jumped in fury, thru up a connect line, posted in the group, and within 5-10 minutes i had 12, and a functional server.

I will be on most sundays for the next lil while, the odd weekday, and ill be keeping the 12man dream alive for anyone who still dares to dream.
I dug DoD up, turns out, it's got like.....a "Weekend at Bernies" thing going. It's dead as fuck, but if we prop it up and let it join a conga line, itll look alive as you or me.

Im Representing for the faggots all across the world
STILL
Hit the corners like a pronestar girl
STILL
Takin my time to perfect my aim, but I still got love for the game
its the D.o.D
Top

did someone say 12man?

Users browsing this forum: No registered users and 11 guests